Have you ever noticed when running PL/SQL scripts in Oracle’s SQL Developer that an annoying “Enter Substitution Variable” dialog pops up, and you have no idea why? I’ve had this happen numerous times and have been meaning to write an article on it to explain how to resolve the issue.

I noticed recently it could be easily duplicated in a WHERE clause with a AND operator in which I have comments that have an ampersand in the comments. This is a sample of the code I had that produced the problem:

Notice in the above code the “& Life” and also “& Physical”. When I execute this in SQL Developer I get this pop up dialog: 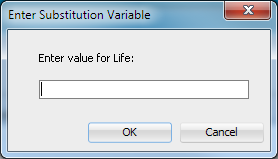 So the “Enter Substitution Variable” is prompting for a value for “Life”.

A quick workaround is to simply remove the ampersand (&) symbols. For example the following code:

An even better fix is to run the following code in SQL Developer:

Once you run that, you won’t ever see the “Enter Substitution Variable” again!

So you can decide. Hopefully this helps someone who has run into the problem before